Gargling Gas adores the battered and bruised, the old dogs that compare and brag about their scars, cars that have served a purpose and clocked up the miles rather than sat gleaming in garages.

Take Christine’s ugly sister above, for example, a car that has attended the ‘University Of Life’, a mechanical Stephen King that could bend your ears for hours about their road trips, owners, bumps and scrapes they’d been through.

Whilst I try and feature all the aspects I love about cars, this post may not resonate with every petrolhead, gearhead or car guy out there. To Gargling Gas, some cars possess character, charm and personality, no matter what their condition. I recently wrote a post on murdered-out cars that partly conveys why I am so passionate about the automobile.

Not many sites are purely dedicated to such a specific aspect about the car, but I stumbled across an amazing place called, Old Parked Cars, and this is exactly what it presents. It reminded me of a guy who published a book solely on atmospheric photos of parked cars, a book I posted about – check it out, Patrick Joust is very talented at capturing just what I’m whittling on about.

I’ve also previously mentioned the horror author, Stephen King on here. If you are aware of his work you’ll have probably detected his love of machines, trucks and cars. Whilst Joust manages to capture a cars’s presence on film, King does it wonderfully through words – I wrote a post on Evil and Cars and King crops up the most.

Actually, now that I’m coming to this post’s conclusion and can see all the highlighted links I’ve added, I’ve just realised I have no conclusion – what I’ve done is unconsciously pieced together a jigsaw of EXACTLY why I love cars – a bit of a long-winded way of doing doing it, I admit, so I apologise if you’ve stuck with it and questioned just what the hell I’ve been banging on about.

Do remember this though, “Because cars have feelings too…” 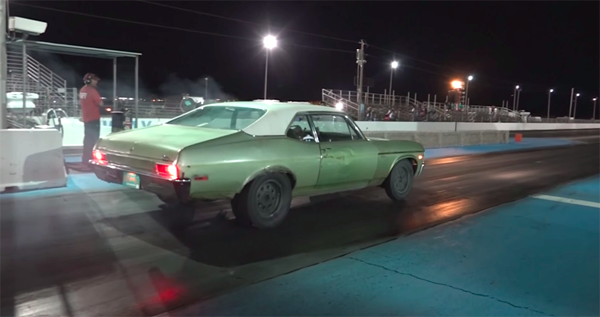 It’s been far too long since I posted a good old sleeper car, so I’ll make up for it by posting an absolute monster of a car.

Brilliantly and aptly named, “The Trash Can” is a 1972 Chevy Nova with a little more than just rust and worn seats under her belt. This classic muscle car boasts a 5.3-L V8 heart, and helping this old-timer breath a little better, twin Precision 58mm turbos turn this tired old dog into a purebred greyhound.

Gargling Gas loves sheep in wolf’s clothing cars so much, we have a sister page dedicated to Sleeper Cars on G+, so if you think “The Trash Can” is right up your alley, check us out and show us your sleepers.

The beauty about this particular sleeper is it covers all the bases when it comes to Gargling Gas’ depiction of the perfect car: Badass, Sinister, Fast, Loud and full of character… after all, cars having feelings too, right?

This is “The Trash Can” trying to destroy a dyno, and whilst I couldn’t find legit BHP figures, the fact she can hit the 1/4 mile in the 9s suggests 800+

The coolest part about “The Trash Can” isn’t just her badass looks and power; it’s the fact she only cost $4K.

Check her out showing off on the strip in the video below.

NOTE: These were test runs, and the fact she left the lights way after the car in the opposite lane was so her crew could listen to the engine etc… 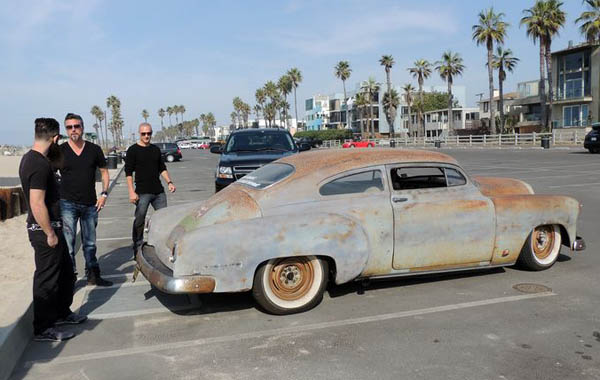 Even if you’re not a real car guy, you probably harbour fond memories of freedom thanks to the automobile – whether it was a piece of junk “first car” or a “daddy’s BMW” car, four wheels and an engine meant doing whatever the hell you wanted… away from your doorstep.

If you’re a car guy like me, you’ll have loads of fond memories from your early days of motoring, whether you got all oily under the hood or you lived your days out on mad road trips. I’ve loved all of my cars but there is the “one” I wished I’d kept, much like Gas Monkey Garage’s first car pictured above and below. 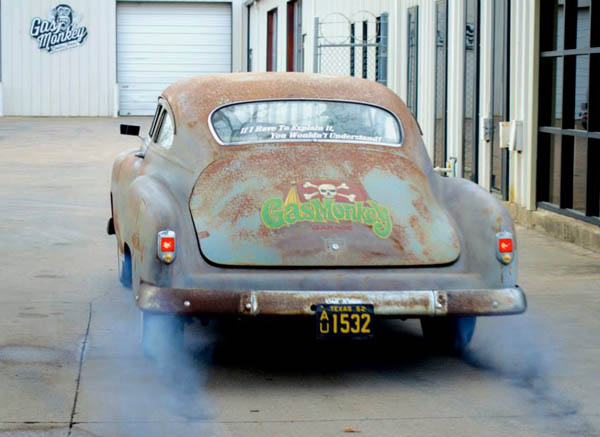 The ratrod 1952 Chevrolet Fleetline was the first car that bought Fast N’ Loud’s Richard Rawlings and Aaron Kaufman together. In one episode, Rawlings finds out the car is up for sale, and despite setting him back $50K, he manages to reunite her with Gas Monkey Garage.

My first car was an orange 1978 MGB GT, and although I spun it in the rain on my first day of legal driving, crunching the rear wing, if I knew then what I know now, I’d have kept her and fixed her up. What I ended up doing was selling her on and buying a 1983 Ford Mustang, much to my mother’s distain.

As I learnt to drive in a tiny 1.0-L Rover Metro, the MG’s rebored 1.8-L engine sounded amazing. The low cockpit was an entirely different world to that of the modern car I learned in – the big steering wheel, leather seats, cool dials and increase in power left me shaking with excitement. She smelt of petrol, oil and leather, and going too fast around corners meant immediate correction, something I hadn’t learnt in my time with the instructor.

My time with her was short, but I wish I’d kept her, and the more I think about those exciting days, the more I want to buy another MGB GT.

What’s the one car you still wished you washed every Sunday morning?

As this is Gargling Gas, here’s Richard Rawling’s sweetheart doing a burnout.

Right now in Sin City the SEMA Show is taking place, the globe’s premier auto trade show. The industry’s biggest luminaries are drawn to it like gamblers are drawn to the lights of the casinos. It’s here at the Las Vegas Convention Center where the latest concept cars are revealed, along with the most innovative technology. If you are in the industry and lucky enough to attend, the SEMA Show offers educational seminars, product demos, special events and networking opportunities.

My favourite is this Chevrolet Camaro Bumblebee – the one from the Transformers. In fact, this 2014 concept is due to feature in Transformers 4 next summer.

It uses the base from the standard Camaro, but this Bumblebee features sleeker headlights, a bigger grille, and giving it a wider and beefier rear, a different set of rear fenders. I particularly like Chevy’s signature yellow paint scheme with the black racing stripes.

Engine options are a V6 and V8, although why would you opt for a V6? To set this special Bumblebee edition apart from the rest, they will come with the edition of Transformers badging on the wheel centers and sill plates, along with an embroidered emblem on the console inside – nice touches.

It’s big, bright and bold, just like a muscle car should be.

The next car grabbing my attention was this absolutely stunning battleship grey supercharged Mustang. Ten years ago people would say “It’s got primer, but where’s the damn paint?” This primer finish has become quite popular, especially with Fords.

The Mustang pictured here is known as the “Switchback” and was created by the Ring Brothers. They have become legends for their custom car creations, and have applied their magic to several other Mustangs in the past.  The Wisconsin-based company debuted this year at  SEMA and I’m sure we’ll see a lot more from them in the future.

Ever since Dodge showed the world what real production speed was all about, I’ve never forgotten the Viper’s bright red body and yellow wheels. The 1st generation is on my list of cars to own in the future – it will probably be my last too!

Over two decades on and evolving through 5 generations, the SRT Viper still maintains the 1st gen’s shape, although underneath it’s a different story. This particular Viper featured at SEMA to display Vivid Racing’s amazing touches.

As you can see, this is one slick snake, covered in carbon fibre from Seibon. Just look at the hood! Seibon’s custom weave design transforms a lightweight hood into a piece of art. Other custom carbon pieces include a front lip, canards, side skirts, the diffuser, and a rear wing. The custom carbon taillight surround you can see is an optional extra on the stock SRT Viper.

The Viper’s gigantic 8.4-L V-10 thumps out 640-BHP and 600-ft-lbs of torque. The Viper SRT is renowned for the noise it makes – it’s not beautiful like a Ferrari; it’s dirty, angry obnoxious. Considering this version is lighter and features a custom exhaust system, it’s probably one of the fastest and loudest cars around.

I seem to have a bee in my bonnet with these little pocket rockets lately, and this yellow and black striped turbo is the reason why. I guess you could call this little Daihatsu a sleeper as it would put up a fair fight against cars twice its size – you’d need to remove the TURBO 130 decal though, perhaps opt for the silver version.

Whenever I decide on writing an article I try and get to the bones as to why I have chosen a particular topic, and if it’ll be a little different or interesting compared to all the usual supercar stuff out there. Why would I feature this little Japanese mechanical bumble bee after previously writing about a Nissan Micra? I mean, why?

After a few minutes I came to the conclusion it wasn’t the aesthetics of these little boxes that did it for me; neither were the practicality or economic running costs (this is coming from a teen who thought a 1983 2.3-L turbo Mustang was a sensible ride… during the late 90s in the UK).

No, what it boils down to is the technology of these tiny engines. The Japanese just know how to shrink things and make them work – they always have done. They’ve been turbocharging small cars for decades and it’s taken a while to catch on stateside, but with all these eco people ranting and raving about the planet, manufactures are now developing ways to maintain bhp figures whilst making it more economical to run.

Whilst this is no WRX or EVO, the little Daihatsu can hit 60-mph in 8 seconds, that’s quicker than a 2004 Alfa Romeo GTV, a Jaguar XF Sedan and a Mercedes-Benz C220 CDI Sport.

For the sleeper enthusiast it serves as a great platform for either tweaking what’s already available or fixing a slightly bigger turbo and trying to reach the 7 second territory of the bigger hot hatches.

That’s it for tiny Japanese cars for a while… I hope.

Any Dale Earnhardt Jr. fans out there fancy owning this 1997 Chevy Monte Carlo signed by the No. 88 NASCAR driver? Yeah? Well HERE she is.

If you like the look of this awesome rally car used by Richard Rawlings from Gas Monkey Garage, click HERE