The car pictured above is everything Gargling Gas isn’t – pathetic, weak and helplessly slow. However, this post came to be (or will come to be) out of a combination of nostalgia hailing back to when I was around four-years-old, and one of my favourite rally cars.

Aside from the colour, the cute little gold car above is identical to the one my Grandfather owned, the fifth Metro to leave the production line and the first painted bronze. He owned a MK 2 Ford Escort before it, and even though I was still learning to tie my shoelaces at the time, I understood this Metro car wasn’t as cool.

However, it was – much to my delight – the first car I managed to sit in the front of whilst moving, a memory I still cherish. I think it was around the time seatbelt laws were introduced as my parents never let me sit up front, but my Grandfather, well he was easy to manipulate. I begged and begged and eventually I broke the old man, and before he’d even walked around to open his door, I was all strapped in. I marvelled at the open space and the fact I was so close to the controls. 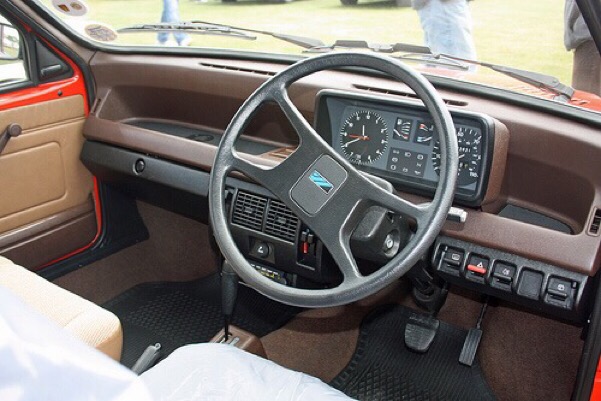 So what about the rally car? How could this little tin box ever hope to race, let alone compete with the likes of Audi, Lancia and Peugeot on the world stage of Group B?

The monster above is the mighty 1985 6R4, a compact weapon of mass destruction. Whilst the family runaround possessed around 60-bhp depending on engine choice, the 6R4’s 3.0-L V6 delivers over 400-bhp.

The 6R4 started off well, only Lancia bettering them, but after mechanical gremlins throughout 1986 and the fact Group B rally was banned due to a series of accidents and spectator deaths, the lunatic Metro ended up competing in rally cross at the hands of privateers.

Another interesting fact about the little boxy car is its link to Jaguar – the 3.0-L V6 found in the 6R4 was given two turbochargers and put into the XJ220 supercar.

I think the fact my Grandfather owned and ferried me around in a Metro is the reason I love the 6R4. They took a popular British runaround loved by the blue-rinse brigade and turned it into something capable of messing the overalls of a seasoned racer.

One thought on “Mini Monster Metro”