After watching a clip of Smokey and The Bandit III today, the one where Burt Reynolds slides his Pontiac Transam underneath a moving juggernaut to evade Buford T. Justice and his buffoon son, I was suddenly hit by a memory of my honeymoon in Cancun. As the bungling Buford swerved in and out of the oncoming traffic, I slowly slipped away and found myself in the back of a Mexican taxi cab. 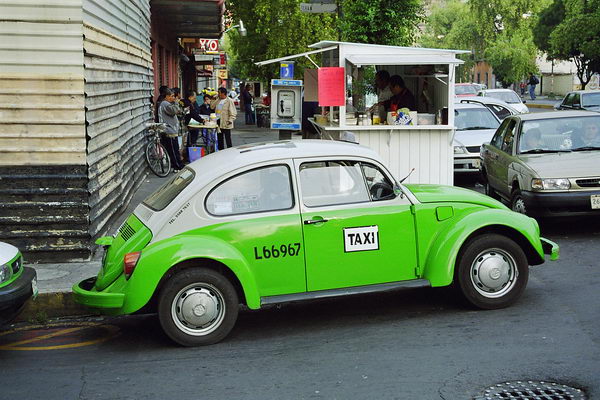 When you holiday in Mexico you expect to see a quaint little car like the VW above, but I’ve been 3 times and you’ll only find these in Mexico City. What my wife and I had to travel in was a very ordinary but dangerous white Nissan like the one below. 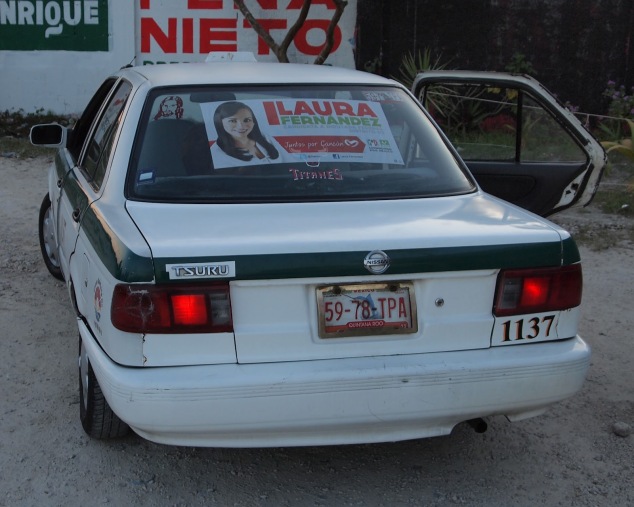 Not wanting to catch a bus and endure all of the hotel stops, we both decided to grab a taxi into town. No big deal, right? We climbed in and told the little rotund Mexican where we wanted to go and all was well. Until we made it onto the freeway…

Although this wasn’t the inside of our taxi, this is what they all look like. The dash in ours was embellished with religious trinkets and figurines. This only galvanised my theory the driver must’ve believed in the afterlife, as he began swerving into the path of oncoming traffic to overtake trucks and juggernauts. His right foot only understood flat-to-the-floor and off – I’d have felt comfier on a fishing boat during a storm. You expected to hear sirens as the police intervened to pull us safely over, and then you saw them either driving in the same way or hanging from vehicles with machine guns.

My wife and I shared a few looks, me shrugging as if to say, “It’s okay, it’s how they drive out here.” After 20 minutes of this, we finally made it into town in one piece. I paid and tipped the driver for our unique near-death experience and I prised my wife’s fingers from the door handle.

Thinking back it does make me smile at how typically British we had been. Instead of saying something, I just sat back and let this maniac swerve all over the freeway. I even thanked and tipped him. And did we learn our lesson?

Of course not – after a meal and a few evening drinks, we hailed another white death machine. The bus? But that would mean sharing a ride with the noisy Spanish and the even noisier and animated Italians. We’re British; we’d sooner die than speak up and attract attention to ourselves.

One thought on “Death Cab Ride And Being British”